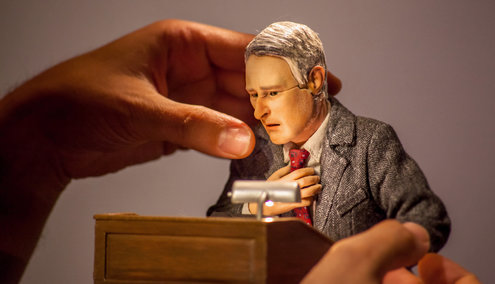 Posted on March 8, 2016September 27, 2017 by blindfieldcollective Posted in Dystopias, Uncategorized

Like all of Charlie Kaufman’s films, Anomalisa eventually reaches a critical threshold, at which the aesthetic becomes claustrophobic, even suffocating. Most clearly, this threshold is envisioned in Kaufman’s first screenplay, Being John Malkovich, in which an introverted puppeteer crawls into a portal in the 7 1/2th floor of an office building that leads into the actor John Malkovich’s mind. The puppeteer, played by the lanky John Cusack, hunches over and squeezes into the space – the kind of opening and transcendence that must at the same time be enclosed and oppressive.

In Anomalisa, this threshold comes with the appearance of the titular character, Lisa, far into the story of Michael Stone, an inspirational speaker and corporate efficiency expert who travels to Cincinnati for the night to deliver a keynote speech about customer-service. Lisa is, as the title suggests, an anomaly. Her appearance briefly yet tragically pierces through the dense aesthetic world of the film – by far the most intricate of Kaufman’s work so far, richly conceptualized in stop-motion animation by Duke Johnson. The film’s aesthetic sinks in gradually, but before long it becomes inescapable: with the exception of Lisa, everyone besides Michael has the same face and the same voice – provided with tiresome invariance by Tom Noonan. This is the face and voice of customer-service, everywhere, all the time: the nonstop pleasantry, flexibility, and patience of office workers, hotel workers, bartenders, taxi-drivers, waitresses, housekeepers, who surround Michael as interchanging and exchangeable.

Like the portal on the 7 1/2th floor, the appearance of Lisa is both liberatory and overbearing. Voiced by Jennifer Jason Leigh, Lisa is an escape from Noonan’s monotony. A customer-service agent, and something like an aged ‘Manic Pixie Dream Girl,’ she is shy and available, misunderstood and conquerable, self-hating and utterly flexibilized. On her forehead, there is a scar that she covers with a pink streak of hair. While she tries to hide the scar from Michael, he finds it enthralling – even more than her pink hair, her scar allures him as a portal out of his life’s uniformity.

As Anomalisa has been absorbed into the film industry’s awards season, critics have mistaken Lisa’s ‘individualism’ in several ways. Most dominantly, the film has been celebrated for the ways in which Michael’s desires for Lisa break down the barriers of her insecurities. Lisa’s ordinariness seems instead extraordinary. In this sense, the film’s critical dimensions have been drastically misconstrued – like the first half of the film, these readings of Lisa cannot escape Michael’s suffocating and misogynist interiority.

Before setting eyes on Lisa, Michael first hears her voice, as it echoes in the hallway outside his hotel room. Michael has just stumbled out of the shower, and water drips off his sagging naked body as he wipes the steam from the mirror to look himself in the face. Her voice interrupts this moment – a glimpse into Michael’s failed attempts at reflexivity. Once Michael has urgently dressed himself to chase this voice down the hall, he discovers the face to which it is attached, a diversion from what he might have otherwise discovered in the mirror. Throughout the film, this is precisely the problem: a deep, terrifying portrait of contemporary white masculinity and managerialism, as an interiority that cannot see itself as interior. 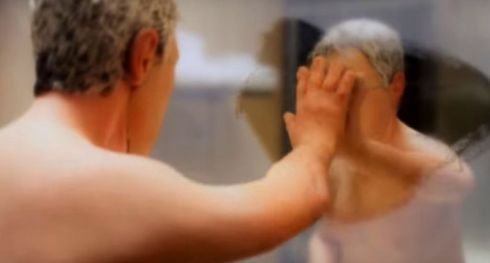 It is possible to read Anomalisa as nostalgic for a particular ideology of individualism that defines late 1990s – early 2000s ‘indie’  filmmaking – the very paradigm from which the Manic Pixie emerged as the dominant archetype of white femininity. This was the Royal Tenenbaums era of saturated color schemes, cutesy mis-en-scène, hipster soundtracks, and eccentric rich New Yorkers. It was out of the vibrant lifelessness of ‘indie’-individualism that Kaufman’s screenplay Eternal Sunshine of the Spotless Mind drew from the Manic Pixie as a source of inspiration.

Yet unlike his hyper-stylized contemporaries from Bush-era ‘indie’ escapism – such as Wes Anderson, Noah Baumbach, Richard Linklater – Kaufman has invoked the Manic Pixie while taking seriously the dream as her social condition. In Kaufman’s case, to be critical has always required a degree of complicity. As Clementine, Kate Winslet’s character in Eternal Sunshine, explains: “Too many guys think I’m a concept, or I complete them, or I’m gonna make them alive. But I’m just a fucked-up girl who’s looking for my own peace of mind; don’t assign me yours.” More than any of Kaufman’s previous projects, however, Anomalisa provides a critical distance from the Manic Pixie, unravelling as an intricate critique of the ideology of ‘individualism’ in this ‘indie’ cultural moment. This is not a particular revelation in his work so much as a sign of historical distance.

“[T]he Manic Pixie is never a point-of-view character,” as Laurie Penny suggests, and “instead of a personality, she has eccentricities, a vaguely offbeat favourite band, a funky fringe.” [1] While certainly there are examples that come beforehand, the Manic Pixie archetype is historically specific to this era of ‘indie’ culture, as the predominant fantasy-structure for an affluent, anti-depressant-stunted generation of white male adolescents, numbed by internet pornography and pre-financial crisis complacency.

In Anomolisa, we encounter this trope anew. Lisa is insecure, vulnerable, and self-defeating. While Michael sees these dimensions of her character, what is haunting is what he cannot see – the way he mistakes his own behavior as a solution for her predicament. Once we reach the threshold of seeing and hearing Lisa for the first time, the film gives its viewer a chance to pivot out of its aesthetic catabolization – the ostensibly totalizing vantage of Michael’s narrative perspective. This involves, rather than an identification with Lisa, a moment of interpellation with Michael’s clouded mirror. 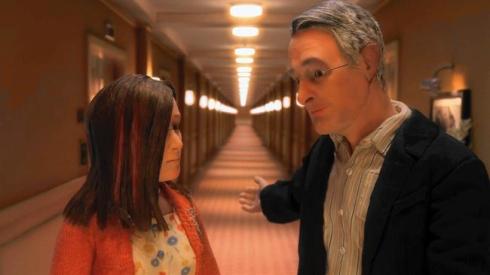 Much of Anomalisa’s reception has focused on one particular scene, in which Lisa and Michael sit together in his hotel room, before having sex. Michael pressures her to sing “Girls Just Wanna Have Fun” – which Lisa heard on her drive that morning. This homage to Cyndi Lauper amplifies the problematic of the Manic Pixie, as a desperate plea for difference in the homogenizing socialities of late capital. Reluctantly, and tragically, Lisa sings:

A customer-service phone agent who has traveled with her co-worker and only friend to Cincinnati for Michael’s keynote speech, Lisa has not had sex in many years. The morning after they sleep together, before his speech, Michael orders them room service. Lisa gets eggs made her favorite way – scrambled. As they sit together with breakfast, the sun begins to creep through the hotel room window, and the light shines on the small bits of scrambled eggs that have gathered on her teeth. Soon, Tom Noonan’s voice begins to overlay Jennifer Jason Leigh’s, and Lisa transforms before Michael, into yet another clone in the film’s aesthetic monotony.

By the end of Anomalisa, the only ‘unique’ femininity preserved for Michael can be found in the face and voice of a singing geisha sex-toy, which he drunkenly buys as a souvenir for his young son, after mistaking an adult shop for a children’s toy store – yet another crisis in his perception explored in the film. The orientalized aesthetic of the geisha is deconstructed, in the doll’s partially robotic physique. The cracked paint of the doll’s face takes on a haunting quality, as another fantasy — like the Manic Pixie — of white masculinity, and the never-ending reification of difference.

Throughout Kaufman’s work, protagonists tend to be masculinized counterparts to the Manic Pixie – misunderstood and eccentrically stylized, but more overtly self-critical. What distinguishes this masculine counterpart is most clearly his creative impulse. While the Manic Pixie is deprived of interiority, her exterior world is entirely dominated by the protagonist’s creative drive. Often emasculated and introverted, these protagonists are artistic – puppeteers, writers, theater directors. Like the Manic Pixie, these artist figures correspond with a key archetype of the contemporary period – celebratory, to some extent, of conditions of creative labor, and part of what Sarah Brouillette describes as the “pervasive vocabulary that fathoms creative expression as an essence of experimentation emanating from an internal and natural source, and that finds one of its models in idealized apprehension of the artists’ ostensible resistance to routine, to management, to standardization, and to commodification.” [2]

In ‘Michael,’ Kaufman diverges from the romanticized precarity of the artistic protagonist, focusing instead on the utter disappearance of this creative impulse through the vantage of a corporate efficiency expert. He has written a book, and his keynote speech is highly anticipated by everyone at the conference. While he is treated as a ‘genius’ by various conference attendees in the hotel, he soon becomes the inverse of Kaufman’s previous masculine archetypes. He is the anti-artist, whose social relations are mediated by efficiency models – an entire ‘philosophy’ of customer-service, which becomes increasingly contradictory as the film explores this dystopia of his interiority.

The morning after his night with Lisa, Michael awakens from a nightmare, in which he is called to the hotel manager’s office, in the basement of the hotel. In the dream, Michael walks past a sea of customer-service clones, finally to discover that the manager’s call was a pronouncement of love. With this discovery, Michael is disgusted — and as he runs through the basement office, to the hallway to his hotel room, his face falls off, revealing a mechanical interior much like the animatronic geisha doll.

When at last Michael delivers his keynote speech, his internal crisis reaches a point of utter contradiction. He tells the audience, full of adoring customer-service agents:

The contrast between Michael’s inspirational rhetoric and the extreme standardization and de-subjectification of his narrative perspective generates a vivid social critique of the labor conditions of service industries. In the endless monotony of customer-service clones, the film explores the feminization of labor — for which “all work has become women’s work,” as Nina Power writes, “even that of men” — in terms of a crisis of masculinity. [3]

Rather than another delightfully precarious artist figure, Kaufman here develops a much more critical character analysis through Michael’s utter internalization of corporate efficiency and the logic of exchange. Michael is everyone’s customer through the narrative — from the taxi-driver, the hotel concierge, to the women for whom he buys drinks in the hotel bar. All of his social interactions are mediated by this logic, which becomes part of the claustrophobic effect of the film.

Eventually Michael returns to his family in Los Angeles, and we find Lisa writing him a politely detached note as her friend drives them out of Cincinnati. The sun shines on them and an unfamiliar smile spreads across her face. While there is no redemption for Michael, we encounter in this last moment a glimpse into Lisa — looking into the car side-mirror, at a reflection of her face in sunlight. This is not some exuberant celebration of her individualism — the type of rhetoric toward which the film is clearly skeptical — but an important insistence on different social conditions.

When Michael first arrives in Cincinnatti, at the beginning of the film, he directs his taxi driver to the Fregoli Hotel. Leopoldo Fregoli was an Italian stage actor who, in the 1890s, became known for his quick-change performances, in which he transformed into numerous characters, flaunting different impersonations. In 1927, Fregoli’s name was taken up to describe a delusional misidentification syndrome. The Fregoli delusion is a paranoid condition, based on the misidentification of people or objects. [4] To this extent, Anomalisa establishes a set of interpretive possibilities for its increasingly speculative narrative about Michael’s perception. What is most provocational about the film, however, is the way that Michael’s condition appears social, far more than pathological or neurological. Michael’s delusions are symptomatic of something much larger in scope — something imperceptible yet totalizing, which cannot be ultimately discovered within the confines of his interiority.