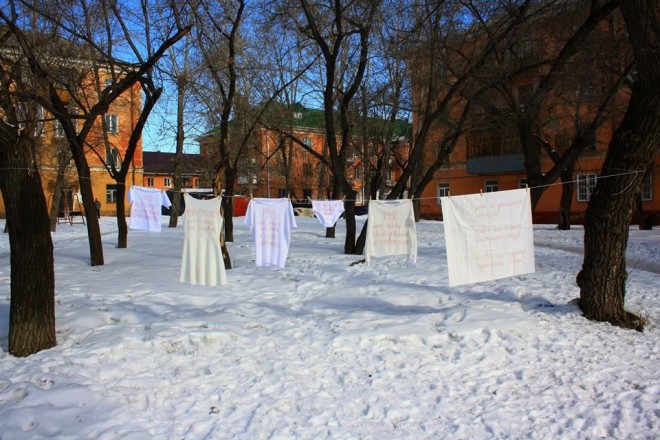 Posted on August 2, 2016September 26, 2017 by blindfieldcollective Posted in Housework, Uncategorized

This piece is a part of an ongoing series on housework.

On March 8, 2016 the inhabitants of a housing estate in the centre of the Russian city Omsk [1] were surprised to encounter an odd-looking selection of crisp white underwear, bed linen, and a tablecloth hung on a washing line above the snowy surface of the estate’s inner yard. All of the laundry pieces bore short texts embroidered with red satin thread. The inscriptions summarized the rights that women in Russia obtained over the course of the last hundred years: suffrage and candidate eligibility (1918), the right to divorce (1917-1944, 1969), the right to education and profession (1918), the right of abortion (1920-1936, 1955), and the right to receive maternity benefits (1969). 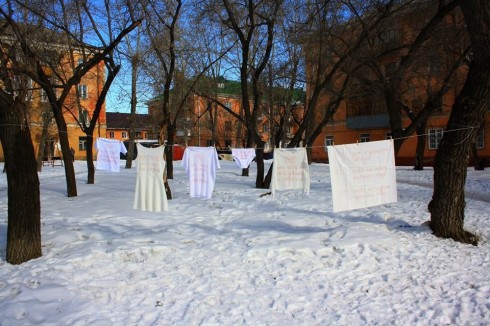 Apart from evoking the most meaningful milestones of Russian women’s path to emancipation, the texts also sought to draw attention to the gender inequalities still existing in today’s Russian society. To that effect, a large linen tablecloth displayed multiple question marks which were set opposite the issues of domestic violence, same-sex marriage, and remuneration of housework. It became evident that the installation had struck a chord with spectators when, at the end of the day, some of the items disappeared from the washing line without a trace. Among the remaining, seemingly uncontroversial pieces of laundry, was a square pillowcase. An inscription on it lacked a specific date, but it cryptically read: ‘The guests have left. The husband is tired.’

The enigmatic lines start to make sense when one recalls the date that the installation was publicly displayed: 8 March, International Women’s Day. In Russia, 8 March was first observed in 1913. In 1921, four years after the socialist revolution, the Soviet authorities formally acknowledged it as a holiday to commemorate women’s participation in the street demonstration in Petrograd on that day in 1917. Since 1966, the International Women’s Day has been declared a non-working day. As such, for many Russians it gradually became free of its initial political meaning: it is mostly associated with the spring season and a popular tradition of giving flowers and gifts to women.

The memorial dates on the disappeared laundry pieces evoked the historical connotations of the holiday. However, the surviving pillowcase—apparently perceived by passers-by as uncontentious, and, therefore, left untouched—pursues a different goal. It points out that the issue of women’s rights does not exclusively pertain to the level of nationwide political decisions but also plays out on a micro-level of today’s private households. The unpretentious, matter-of-fact statements on the pillowcase bring to light an underestimated and usually overlooked instance of gender inequality: the distribution of domestic tasks. The embroidered words make it clear that the widespread practice of lavishing women with exuberant (and superficial) tokens of attention does not preclude the conventional assumptions that it is also women who will ensure this day’s successful celebration. On this day, a woman in an average Russian household is expected to look particularly beautiful, tidy and adorn the house, prepare a copious festive meal, and entertain the guests. And, after the guests have departed and her husband has called it a day, multiple chores remain before that woman can finally rest her head on that pillow. Accordingly, the flat pillowcase hanging from a cord in the deserted, darkening yard provokes a lasting impression of never-ending household tasks and physical exhaustion. 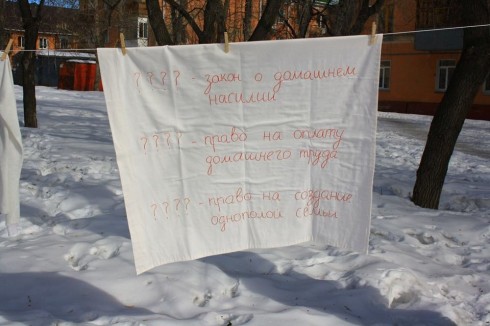 The installation on March 8th is the product of a Russian art collective, Naden’ka [2], that consists of Maria Aleksandrova, Aliona and Oksana Isakhanian, Anastasia Makarenko, Nadezhda Nikiforova, and Maria Rybka. Formed in 2015 in Omsk, Naden’ka define themselves as an artistic union, a community, an ambulant sewing co-op, a paint-and-construction shop, a partisan party, a private diary, and a story of friendship. Although the group members have different backgrounds and hold regular jobs in public relations, event management, marketing, journalism and design to sustain themselves financially, five of them attended The School of Engaged Art Chto Delat’ – a joint educational project of the internationally renowned artistic platform Chto Delat’ and the Rosa Luxemburg Foundation established in 2013 in St Petersburg in order to develop a new, politically conscious generation of Russian artists.

Using installation techniques, performances, public seminars, and community projects, Naden’ka promote the role of art activism in addressing questions of gender, material labour, solidarity, and social justice in contemporary Russian society. As a sewing co-op, it is particularly known for recycling used, damaged, and worn-out textile materials that it transforms into household objects, clothes, and bags. The money raised through the sales of these objects (which are regularly offered online and at charity fairs) is spent to support feminist art manifestations and social initiatives in the neighbourhood.

Apart from the installation discussed above, the series of objects dedicated to the theme of housework also includes a collection of oven mitts intended as a gift-set for a New Year’s Eve celebration. 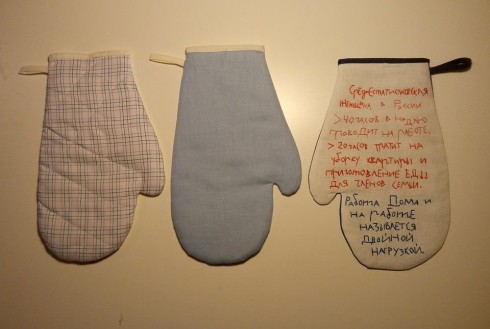 Analogous to 8 March, abundant and elaborate dinners as well as exchanges of gifts traditionally mark the turn of the year in Russia. By suggesting oven mitts as a suitable seasonal gift, Naden’ka again draw attention to the women’s position in today’s Russian society, where housework continues to be identified as a female rather than male responsibility. The women—who are presently able, by right, to study, work, and be financially independent—are still expected to appear virtuous and desirable while simultaneously functioning as mothers, sisters, and wives bringing up children, cooking, cleaning, and providing the unifying core of the family. Unpaid domestic labor performed by women in addition to their participation in the workforce, which Arlie Hochschild aptly named “the second shift” is, of course, a widespread international phenomenon. Ever since Hochschild’s book by the same title first appeared in 1989, sociological surveys repeatedly show that working women still report doing twice as much housework and child rearing as their partners (e.g., Coltrane 2000). Even in Western countries where households increasingly operate on an equalitarian basis the conventional cultural attitudes regarding family roles change very slowly (Livingston and Judge 2008). Moreover, after centuries of societal conditioning the women themselves struggle to assert their transition from carers to career makers (McMillen 2011). What makes the situation in Russia particularly complex and vexing is that whereas in the West the double work load became an issue only in the second half of the 20th century, Russian women were compelled to master a precarious balancing of time and effort between their careers and household responsibilities since the socialist revolution of 1917. [3]

Naden’ka, takes on this enduring phenomenon head on. Akin to the lines on one of the laundry pieces – “the right to remuneration of housework – ???,’ the text embroidered on one of the mitts informs the reader: ‘During the week, the statistically average woman in Russia spends more than forty hours at work, more than twenty hours cleaning the house and cooking for her family. The labour carried out at home and at work is called a double load.’

While the laundry and the oven mitts directly associate with the conventional understanding of ‘female tasks’ in Russian households, the last item in the series, a black linen shirt with a pattern of tiny pink hand saws embroidered on it, deals with the subject of housework differently.

The shirt was produced after one of the artists, to raise extra money, spent the summer months in 2015 at a construction site, working side-by-side with male builders and painters. While appreciating her strength and adeptness in carrying out an ‘unwomanly’ job, the male workers at the same time expected her to be charming, agreeable and ‘to attend on them’, taking  offence when she refused to conform. Ironically, the men did nothing to mitigate the excessive physical strain under which their ‘weak’ female co-worker was put. To reflect on this story, the white label loosely attached to the shirt contains the following text: ‘Female work shirt. Be feminine. Be lovely. Don’t swear. Be weak. Don’t carry heavy loads. Don’t perform male tasks. Dress smartly. I will look after you.’ In a playful way, the juxtaposition of the text with the pink hand saw ornaments, exposes the complacent, patriarchal discourse dominating gender attitudes in Russia today. 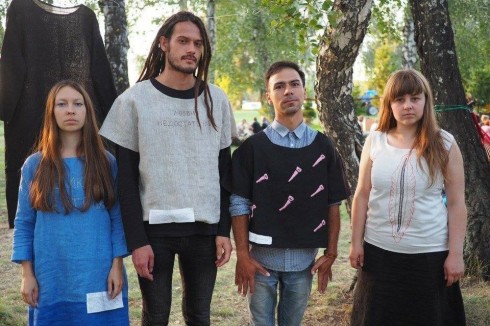 Naden’ka destabilized the established system of gender relations further by making a male model wear the shirt at an exhibition. To drive the message home, the art collective’s manifesto asserts: ‘Naden’ka acts, Naden’ka doesn’t surrender…. Naden’ka is a woman nor a man. Naden’ka sews, embroiders, cuts, saws, hits the nails, paints, glues and tears… Naden’ka is about liberation.’

This essay is based on the author’s interview with the Naden’ka collective.

All photos are courtesy of the artists.

[1] Omsk is a regional administrative centre in Southwestern Siberia. With a population larger than 1.1 mln. inhabitants it is the eighth city by size in the Russian Federation. It has a large industrial infrastructure including machine engineering, petrochemistry, military industrial sector and aerospace industry, which was gravely affected by the 2015 financial crisis in Russia. In the recent years the city also suffered a dramatic increase of migration of young entrepreneurs and  intellectuals to other regions caused by their dissatisfaction with the authorities’ policies in the area of socioeconomic and cultural development and low career expectations.

[2] Naden’ka is a diminutive, intimate form of the Russian girl name Nadezhda.

[3] As a result, the collapse of the Soviet regime even led to the rise of the traditionalist movement seeking to validate the “natural” feminine roles of mother and wife, and to reinstall the masculine responsibility for the family’s economic welfare (Zhurzhenko 2004).

Coltrane, Scott. 2000. Research on Household Labor: Modeling and Measuring the Social Embeddedness of Routine Family Work” Journal of Marriage and the Family, 62, pp. 1208–1233.

Livingston Beth A. and Timothy A. Judge. 2008. “Emotional Responses to Work–Family Conflict: An Examination of Gender Role Orientation Among Working Men and Women” Journal of Applied Psychology, 93, No. 1, pp. 207–216.

Irina Souch has a background in Germanic Philology, Translation Theory and Literary Studies. She holds a position of Affiliated Researcher at the Amsterdam School for Cultural Analysis (ASCA) of the University of Amsterdam. Her research explores the relations between contemporary Western and Russian philosophy, critical theory, film and television. She is currently working on a book in which she analyses post-Soviet popular television series and films to address the questions of formation, assertion and representation of Russian identities. Irina also works as translator and conference interpreter. Irina can be contacted at i.s.souch@uva.nl.