Posted on October 27, 2016September 26, 2017 by blindfieldcollective Posted in Uncategorized

Usually, the first thing out of my mouth when I meet someone (for better or for worse) is, “Where are you from?” I want to know what they love; I want to know where, if possible, we overlap.

In my recent work on the gendered violence of marine debris—contaminants that bond to plastic in marine environments disproportionately affect bodies sexed female at birth (endocrine disruptors such as BPA commonly found in plastics affect estrogen function; mysteriously, these effects are even noticeable in babies); waste is an inherent byproduct of a patriarchal white supremacist economic system built on domination and exploitation of human and natural resources to generate value, and the oceans are as a repository for the discarded surplus—inquiring into origins has been useful for considering transnational shipping and distribution routes, chokepoints of just-in-time production, and histories of empire and petrochemical production. 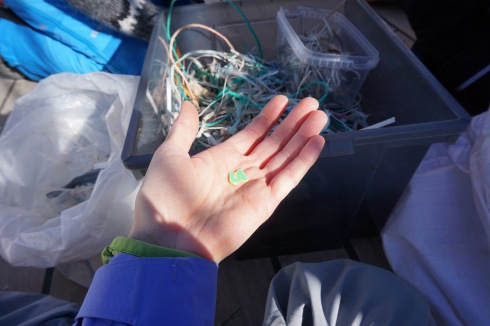 A while ago I cut off a bunch of friendships because there were too many drugs for me to feel safe. Also the sexual relationships were getting complicated, and as an object of desire with many desires of their own, who hadn’t even begun to figure out their gender or sexuality, I thought the solution was for me to remove myself. This is called Bailing Out.

I have found “the oceans,” especially the so-called Great Pacific Garbage Patch, a solid point of departure for answering the “where” question in relation to surplus value under late capitalism. For example:

Q: Where does it end up?

A: In our bodies.

A: Because bodies sexed female at birth are not valued.

A: Because women are still not seen as people.

A: Because plastics that break down into smaller and smaller fragments but never quite biodegrade enter the food web at the level of plankton and are transferred, along with the chemicals that stick to them, such as persistent organic pollutants, into the food we eat and ourselves.

A: Because, since fossil fuels will “always” keep renewing themselves (if slowly), extraction isn’t actually a problem (“we’ve been doing it for 5,000 years!”).

A: Because domination and exploitation, and the mentality of conquering, are essential to the current mainstream economic system. Because things haven’t changed yet.

I’m 4,000 miles from home. I’m in a tundra desert. Between sleeps I make myself toast. I’m still sleeping as if on a ship, and I wake up at 2 am on the dot. A lover I haven’t seen in several years is in my dream; he, shepherded by a queer woman friend of mine, guides me home with his bicycle. It’s dark in the dream. It’s the only nighttime I’ve seen in two months.

In this dream, as in my last, there are trees. These are the only trees I’ve seen in my time in the desert archipelago in the Arctic. I haven’t seen the dwarf birch. I have, however, seen many different types of seaweed, some of it meters long. I’ve seen moss and lichen in greens, greys, and oranges. I’ve seen compass plant and mountain sorrel (which makes me think of another person from that time in my life, who was very important to me, who brewed his own kvass and climbed into tree stumps and ate redwood sorrel and baked his own bread and spoke Russian as well as Swedish and Spanish and, one time, came to visit me at my mom’s house and ran all the way to the oak tree on the far side of the reservoir and back in a storm, back when we still had storms). I’ve seen saxifrage and Svalbard poppy. I’ve seen Arctic foxes, Svalbard reindeer, belugas, walruses, minke whales, guillemots, kittiwakes, barnacle geese, ringed seals, bearded seals, and a blue whale. And I’ve seen kilo upon kilo of trash on every beach.

The ecotoxicologists, marine biologists, and sailors I’ve talked to have said that the origins of the marine debris here are 80% fishery, 20% other, but whether that 80% and 20% originate in the territory of Svalbard, itself under Norway’s jurisdiction, remains unknown. What is known is that most of the trash (enough to merit a week-long cleanup cruise led by the governor every summer) appears on the northern beaches, and that the northwest corner of the archipelago, where I took a water sample to analyze for microplastics, where we saw the walruses, where one of our guides found a fully intact orange plastic basket that she washed out and brought home for laundry, just south of where we saw the starving polar bear walking on the beach with the three yellow, pink, and orange buoys, is the terminus of the Gulf Stream, which transports not only the warm air that makes the 79-degree latitude relatively mild but also trash from the Americas in the North Atlantic Drift.

So “Where?” and “What do you love?” are entwined like a reindeer skull in a fishing line (indeed, the Barents Sea is a major fishery for Norway and Russia), or like the bear that got caught in a net in 2014 and was tranquilized and released by authorities.

Our species doesn’t have a whole lot of time left. Planned obsolescence has taught us that things only have value for a limited amount of time and then are used up.

There’s a gyre full of trash composed of approximately 80% plastic in every ocean. This plastic, as well as rubber items, pharmaceuticals, nuclear waste, pesticides, and so on and so forth are not by any means confined to areas that could be cleaned up; rather, they circulate through the entire global water cycle. Mussels are filtering microplastics from marine environments and, according to the 2016 UNEP and GRID-Arendal report Marine Litter: Vital Graphics, marine debris has been found in 100% of sea turtles.

But planned obsolescence was invented to end the Great Depression by creating jobs in factories and surplus for the United States government—a government that to this day treats entire populations, especially Black and indigenous people, especially women and femmes, as disposable. Plastics have only been in widespread use for about sixty-five years. The American myths of self-sufficiency, individualism, and exceptionalism have only gotten us this far (I’m looking at you, San Francisco).

Resurrecting old relationships might be an attempt at stability in a world increasingly characterized by so-called mobility (read: migration, racism, xenophobia, greenwashing, adjunctification, precarity), and it might be worth it. When consumption levels are stimulated and perpetuated by the government, caring for and keeping what we already have is an act of resistance. We need each other more than ever.