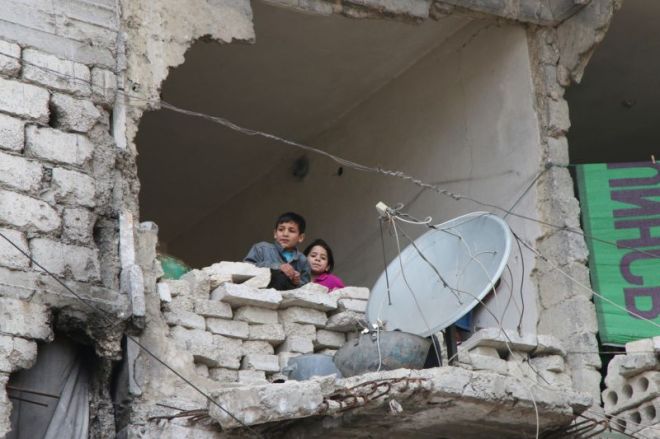 Posted on January 1, 2017September 26, 2017 by blindfieldcollective Posted in Dystopias, Uncategorized

White liberal sensibility unscathed, the persisting threats would be unnamable.

We could anticipate the political rationalizations of “it could be worse,” of a “lesser evil,” of a set of seemingly necessary preventative measures.

Would time spin backwards, as if it had once been moving forward?

Could space undo itself?

We might encounter the push rightward as something outside of a false binary. Could convenience continue to subordinate history? We might operate under notions of decency and passivity — otherwise violent erasures of conditions of difference. We might suffer under the political contradiction of a ‘feminist’ presidency — the very impossibility of actualized capitalist ‘equality.’

Speculation may seem necessary — and insistently dystopian — for the present to appear as a site of struggle.

What are different ways of thinking speculatively?

III.
The legitimacy of a news story is widely debated over the mass murder of 82 civilians in Aleppo, including 13 children. The urgency to describe this as genocide, among other things, is swarmed by the panic to feel like ‘you can do something.’

“We were just talking, and the next moment it was just like in a dream. Then, I started shouting and heard my parents shouting, too. And I realized that a missile had hit our home. Earlier, we had heard the missile flying overhead from an area near us. But this time it landed right in our house… I’m afraid. I don’t want to return home.” [5]

In Silicon Valley, where ⅓ of the schoolchildren are homeless, there are discussions of world improvement in which ‘utopia’ is describable, nameable, achievable under capitalism — every blueprint shows how to erase more and more of everything, how to make more and more of things that don’t look like suffering, how to make the possibility of “improvement” appear more like its opposite…

By the end of this year, more than 1140 people have been killed by the police in the United States, though some reports say something like 955. [6] [7]

IV.
What is at once the foreclosure of historical experience is a proliferation of historical struggles. The speculative present describes these vacillations and contradictions in our attempt to understand what on earth is happening to this world.

The age of neoliberalism has been profoundly characterized by “No Future” — a characterization which has mutated into a speculative present. “No Future” is a cluster of temporalities: an inability to think the future, the impotence of futurity as the waning of utopian longing, the evaporation of historical thought and imagination, the non-future of an apocalyptic present, the dwindling of revolutionary temporalities, and/or the insistence on a revolutionary present.

This multiplication of time coincides with a regime of immediacy — the simultaneity of unendingness and impending catastrophes, the simultaneity which Marx describes of the dynamic of production and consumption under capitalism: “Production is thus at the same time consumption, and consumption is at the same time production.” [9] In seeking to delineate this dynamic as a temporal process, the spatial relation of this process as a system destabilizes the desire for capitalist time to unfold sequentially.

Linear thinking persists as a phantom of this desire for sequence, order, narrativity. From Walter Benjamin, we understand this conception of time as a continuum to be in direct conflict with revolution. To articulate history instead through its discontinuities has revolutionary stakes in the struggle against Fascism, as Benjamin writes:

The tradition of the oppressed teaches us that the “state of emergency” in which we live is not the exception but the rule. We must attain to a conception of history that is in keeping with this insight. Then we shall clearly realize that it is our task to bring about a real state of emergency, and this will improve our position in the struggle against Fascism. One reason why Fascism has a chance is that in the name of progress its opponents treat it as a historical norm. [10]

In its most revolutionary articulation, “No Future” grasps this refusal of progress as such.

If only a year could be ‘new.’

Here we have become used to the homeless as fixtures on various corners — to pass by Norm on the Broadway bridge on the side by the bank was something to anticipate.

Here we have become used to the disappearance of the homeless, too. We asked for months what happened to Norm. No one knew, but most assumed he’d died. The last time I saw him was the year that the park encampments were evicted.

I know how it feels to lose a friend,
But I don’t know about losing 6, 8, 9, 12 all at once.
December began with these numbers rising,
Just like flames, smoke, and dust.

Part of the speculative character of the present is its seeming unpredictability, which is nevertheless predictable. “A society which rashly privileges the present — real time — to the detriment of both the past and the future, also privileges the accident,” writes Paul Virilio. The accident is this predictable unpredictability of capitalist time. Accidents and catastrophes are brought onto the scene by “a civilization that sets immediacy, ubiquity and instantaneity to work.” [13] The finitude of the accident is a desirable distraction, however, from the global-scale catastrophe of capitalism.

The accidental rise of Trump is no exception.

There are neo-nazis around the corner, unafraid of anything.

VIII.
Clocks, weeks, days, hours are refigured by the speed and tenacity of a ‘global’ capitalism for which space is sublime and infinite. At the drop of a “new year,” we can pause at the strange notion of the calendar, recalling Marx’s “The Eighteenth Brumaire of Louis Bonaparte”:

The period that we have before us comprises the most motley mixture of crying contradictions… heroes without heroic deeds, history without events; development, whose sole driving force seems to be the calendar, wearying with constant repetition of the same tensions and relaxations; antagonisms that periodically seem to work themselves up to a climax only to lose their sharpness and fall away without being able to resolve themselves… [14]

The occasion of a ‘new year’ might be a site of speculation, like an object of science fiction. Speculative thought, in Samuel Delany’s terms, “isn’t just thinking about the world out there. It’s also thinking about how that world might be — a particularly important exercise for those who are oppressed.” To change the world it is necessary “to be able to think about a world that works differently.” [15] This is especially the case in a world that eliminates any sense of its own transformation, outside of utter catastrophe.

[1] This is excerpted from Nina Simone’s interpretation of “The 22nd Century”, originally written by Exuma; “There is no oxygen in the air / Men and women have lost their hair / Ashen faces legs that stand / Ghosts and goblins walk in this land / When tomorrow becomes yesterday / And tomorrow becomes eternity / When the soul with the soul goes away beyond / When life is taken and there are no more babies born / And there is no one and there is everyone / When there is no one and there is everyone / Tomorrow will be the 22nd century…”

[5] Excerpted interviews from Richard Flanagan, “Notes on the Syrian Exodus”, The Guardian, 4 March 2016

[11] Octavia Butler with Tan Cecilia, “The Future is Not Some Mystical Place: A Conversation With the Incomparable Storyteller Octavia E Butler”, Sojourner 25 (5), January 2000