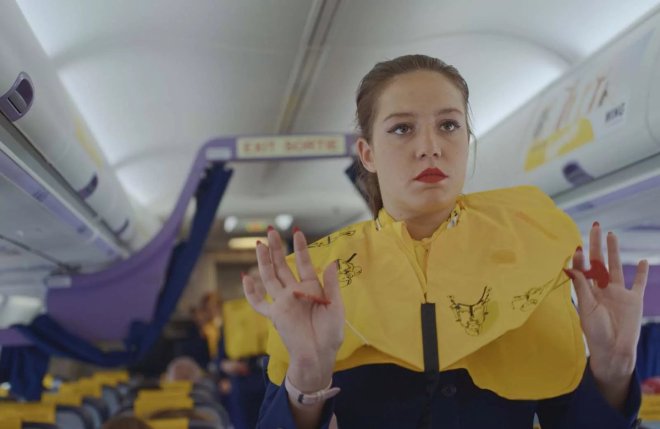 N.B. This short review was originally posted on Sophie’s patreon, reproutopia, which we encourage you to support.

It’s been almost forty years since the publication of Arlie Hochschild’s The Managed Heart, the (now ex-)Marxist feminist sociologist’s landmark account of the “emotional labor” of flight attendants, which studied air hostesses’ provision—at 35,000 feet—of hours upon hours of inauthentic authenticity in the context of commodified hospitality. The work of a “stewardess,” as the British pop band Busted pointed out in 2002, is to make the male-coded airline customer “feel better” in every sense (including, perhaps especially, sexually). Hochschild’s famous theoretic intervention was based on research she conducted in 1981-82 at the Delta Airlines training program in Atlanta, and the recruiting program of Pan American Airways in San Francisco. It has been theoretically revisited every decade or so ever since—by actuallly-Marxist academics interested in “affective labor,” customer service, care economies, sex work, social reproduction and artificial intelligence (viz. “The Electronic Heart”). It has also been  empirically extended by scholars of all persuasions (Hochschild herself has been a liberal for some time. For example, in a recent ethnography seeking to update Hochschild, sociologists Marlene Santin and Benjamin Kelly argue that “now,” post-9/11, “flight attendants are … more assertive when they interact with passengers.”

In the French-Belgian directors Julie Lecoustre and Emmanuel Marre’s new film about the labor of cabin-crew on a budget European airline, Rien à Foutre (Zero Fucks Given), it is hard to imagine how there could have been (once—in the ‘80s, presumably) less leeway, somehow, for being assertive with passengers. The film’s Belgian protagonist, a flight attendant called Cassandre (played by the best actor of all time, Adèle Exarchopoulos), is assaulted every week on the job by drunk Liverpudlians flying under her care to Lanzarote and Barcelona: “Go on, give us a smile. Give us a smile. Give us a smile. You’re nothing, are you? You work a shitty little job in a shitty little company.”

Cassandre does not smile at the man who addresses her like this in one scene. But nor can she say anything. “I would try to distract from the situation, and never criticize him” she beamingly answers an interviewer who is considering recruiting her – via Zoom – for another airline based in Dubai, after he asks her what she would do in the hypothetical situation of a “guest” behaving “inappropriately” towards her.

“You’re nothing. ” Cassandre, as incarnated by Exarchopoulos, certainly shares this view of herself. She somehow hates her job and identifies wholly with it at the same time. She shares a condo in Lanzarote with other flight attendants and drinks too much (a middle-manager threatens to ground her because he smells booze on her breath). She consents, when another manager leaves her a voicemail specifying she is not at all obliged to consent, to working extra shifts over Christmas—instead of going home to Brussels—and then lies to her sister, saying that she tried to get out of those precise shifts and was refused. (Her sister immediately knows that Cassandre in fact volunteered for more work.)

Exarchopoulos “giving no fucks” in this movie embodies a puffy-faced, underkempt, depressive physicality that is painfully and unwelcomely resonant to me—as well as a Frenchness that takes me right back to my childhood and adolescence in France. Exarchopoulos’s face is like an internal organ one feels should not really be exposed to view: a magnificent, palpitating hot mess.

When not at work, and not out clubbing in some Canary Islands discotheque, Cassandre is permanently slumped, recumbent and on her phone, swiping on Tinder and saying “meh, maybe” to proposals from her roommates to go out and do something. She labors emotionally in this “off time” all the same, adjusting her bed-depression stance into a series of tricky angles and come-hither poses for her phone camera, since prospective hookups on her apps demand nudes.

Cassandre thinks constantly drinking vodka is a way to stave off disease. She is falling apart … but she is scoring excellent sales numbers. She says “no” to the socialist organizers who try to convince her to join their airline workers’ union, saying she “does not believe in change.” She does not believe in change. When she is ordered to take on more responsibilities (and become cabin manager rather than just crew), she declines, saying, “I love responsibility but” she is fine where she is. The response comes that she has no choice about the matter: it’s either become a manager or be fired. “Tell me what to do, I will do it,” answers our anti-heroine.

Cassandre dreams only, and at the same time as not-wanting-a-promotion, of working for a fancier—Emirati—airline. She says this will entail having a tiger as a pet and a “dolphin in my jacuzzi.” She does not really believe this. But, at the same time, she does believe it. She cares about “making it” (job wise), and she cares about nothing, at the same time. (Hochschild: “when a worker abandons her work smile, what kind of tie remains between her smile and her self?”)  “Uh, so… what is the definition of attachment?” she asks her Brussels friends, genuinely confused, when they point out that she has nothing real in her life: no connections.

So: the first half of Lecoustre and Marre’s film is extraordinarily great: a cinéma-vérité masterpiece about dissociation on the job, the unmanageability of the Hochschildian heart, and latent anti-work yearning fomenting among the public-facing staff at RyanAir (the fictional company is called “Wing”). The vérité-adjacent methodology used to make Rien à Foutre, whereby non-actors (i.e., real cabin crew) were used for many of the roles, mobile phones were used to film much of the footage, and Exarchopoulos was directed to do her own make-up, et cetera, elegantly invokes the uncanny collapse of real self and true feeling into “deep acting” that Arlie Hochschild documented so many years ago. The sequences in which trainee cabin managers, one by one, go up against a wall under a glaring ceiling light and attempt to hold a smile for thirty seconds, is gruesomely unforgettable. Up until about halfway through, Rien à Foutre is squarely of the genre my partner Vicky and I like to call “People at Work.”

Unfortunately, the film-makers did not have the courage of their convictions. They insert a long and unnecessary sequence at Cassandre’s father’s house in Belgium, after Cassandre gets furloughed for buying alcohol for a “deeply sad” solo female passenger. I was moved by Cassandre’s care of the “deeply sad” eastern European woman, and by the small rumblings of class consciousness she evinces in defense of the serious infractions she committed in the process of giving this care (using her own credit card, buying alcohol, offering exceptional treatment by listening too long, listening too genuinely, as the client swiped through her gallery of loved ones). I wanted to see the contradictions of the workplace – the “general process” of the commercialization of feeling – begin to collapse.

There are radically beautiful moments in the Brussels section, too, for instance when Cassandre and her sister smoke in the garden outside their childhood home, and the camera dwells calmly on the pitch-black darkness, in which only the two glowing tips of their cigarettes can be seen, floating as though in space. But I wish the film believed in itself sufficiently to carry the RyanAir-feminized-workers’ inquiry through, and leave it there. Admittedly one can imagine the early-on boardroom meetings (indeed, one can find the reviews that still give this verdict…) in which the money-men said: “What?! You’re telling me your movie is simply about this girl doing her shitty job, and that’s it?!” and Lecoustre and Marre hastily added: “No, no, of course not… Then Cassandre goes home and we discover that her profound working-class anomie is actually all about her difficulty grieving her mother, who died in a car crash.”

The psychologization and individualization of this initially and promisingly proletarianist artwork is disappointing. Leaving that disappointment aside, however, Cassandre is a study in the extent to which surplus-value can still be generated off of the barely-managed heart. The material and affective systems through which she sells her labor-power, culminating in her socially-distanced selfie in front of a grim and alienated light-display at night in Dubai, are a slow-moving disaster; a glacial emergency unfolding for humankind (not to mention all other species). This in my view, is the reason this alcoholic character with the unshaved legs and wonky red lipstick – to whom organized labor solidarity does not appeal, yet who it is impossible not to love – is named after the Trojan priestess who warned everybody that the apocalypse was nigh, and no one listened.

You can read more work by Sophie Lewis by consulting her website lasophielle.org or by subscribing to her patreon, patreon.com/reproutopia.